A Miraculous Affair of the Heart

A MIRACULOUS AFFAIR OF THE HEART

Viewing art is like falling in love. Art has the ability to transport and move the viewer. Art expresses emotion and beauty like nothing else. Art is truly an affair of the heart. 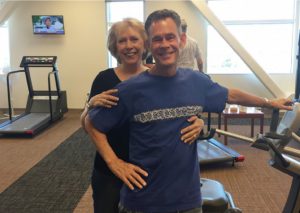 Recently, nationally acclaimed artist and watercolorist, David Drummond, experienced a heart-stopping moment that brought him to St. George. Through an affair of the heart, Drummond and his wife, Priscilla, have come to love and support Dixie Regional Medical Center.

While earning a PhD in physics, Drummond painted and sold watercolor paintings to make ends meet. He went into his family’s business with his brother who develops scientific medical equipment, items that are used every day in cardiac catheterization labs. Currently, Drummond paints full time. He has artwork in many museums and was commissioned by the White House to paint their annual Christmas card.

The Drummonds live in Albuquerque, New Mexico, where Drummond paints what is close to his heart. He loves the red bluffs of the southwest and especially Lake Powell. He loves to paint the ebb and flow of blue water against magnificent red cliffs. Subsequently, the Drummonds have a second home in Greenhaven, Arizona, near Page, where they live part time. They were in Greenhaven when David’s heart stopped early one morning as they were lying in bed. “It all happened so fast,” said Priscilla. “One minute David was saying his chest felt funny, and the next I was trying to get him to stay awake, performing  CPR, and calling 911.” The emergency responders immediately called for a helicopter which landed in their front yard. Drummond was rushed out so quickly, he did not have ID. The medical technicians on the helicopter kept asking him his name, but all he remembers is that it was difficult to breathe, let alone answer. Drummond arrived at Dixie Regional Medical Center as a John Doe. Priscilla meanwhile made a few key phone calls to friends and family and was driven by a neighbor to St. George. Cell service is inconsistent on that drive, so it was David’s brother in Philadelphia that was able to call Dixie Regional and supply a name and medical history for Drummond who flat-lined again as the helicopter landed.

After reviving and stabilizing Drummond with CPR, Dr. David Boorman performed an emergency stent procedure because Drummond had a total blockage to his right coronary artery. Doctors told Priscilla they weren’t sure how much cognitive function David would retain. Drummond awoke in the ICU on a ventilator and a heart pump. He immediately squeezed Priscilla’s hand. “The first thing I remember about waking up,” said Drummond, “was trying to do math problems in my head to make sure my brain was still functioning. Dr. David Boorman introduced himself and explained to me what had happened and I felt very lucky to be alive.”

Miraculously after 24 hours, the ventilator was removed, and David was able to talk. By his third and final day in the ICU, David was laughing so hard with Priscilla and their daughter, Jennifer, that the nurses became concerned because of his bruised and cracked ribs (a result of CPR). “I didn’t care that laughing hurt,” said Drummond. “I was just happy to be there. The doctors tell me I’m a celebrity because I made it through such a major event virtually unscathed.”

Drummond spent a week in the hospital. He and Priscilla were so impressed with the care he received, that Drummond decided to stay and attend cardiac rehabilitation at Dixie Regional. An ultrasound recently revealed no major damage to Drummond’s heart tissue. A true miracle.

The Drummonds recognize a series of miracles that have facilitated his recovery. “Friends, family, and perfect strangers,” said Priscilla, “have helped David and I through this crisis. People have cleaned our home, taken care of our dogs, prayed with me, and driven me all the way to St. George. We feel very blessed.”

“What really saved me,” said Drummond, “was that Priscilla was there to give me CPR and to call 911. I’m also grateful to the first responders, the helicopter transport, and to the doctors, nurses and medical personnel at Dixie Regional Medical Center.” The Drummonds decided to show their gratitude by supporting the Jubilee Home (charitable lodging for out-of-town patients and their families) and the new cardiovascular hybrid surgical suite that will be included as part of the Dixie Regional expansion project. “The new surgical suite has become very near and dear to my heart,” said Drummond. “As my heart heals, I will continue creating art, someday hiking again, and doing what I love best. I feel as though I have been given a do-over. It is a miracle I am here and healthy today.”